A Day in the Park! 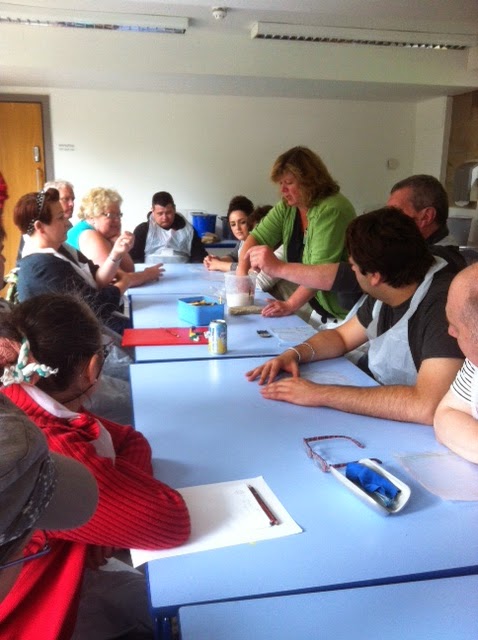 The glorious Yorkshire Sculpture Park is right on our doorstep so UPLIFT decided to pay a visit and a relaxing day was had by all!


Starting with a guided tour of the park UPLIFTERS viewed the work of exhibiting artist Ursula Von Rydingsvard and the afternoon saw us in the thick of the action creating our own plaster made sculptures.

Thanks to the YSP team for a joyful day in the most joyful surroundings!

Posted by UPLIFT Barnsley at 09:28 No comments:

It’s not long to go till the greatest race on Earth passes through God’s own county, Yorkshire! And in the spirit of the Tour De France, UPLIFT celebrated with a little French fancy of their own! 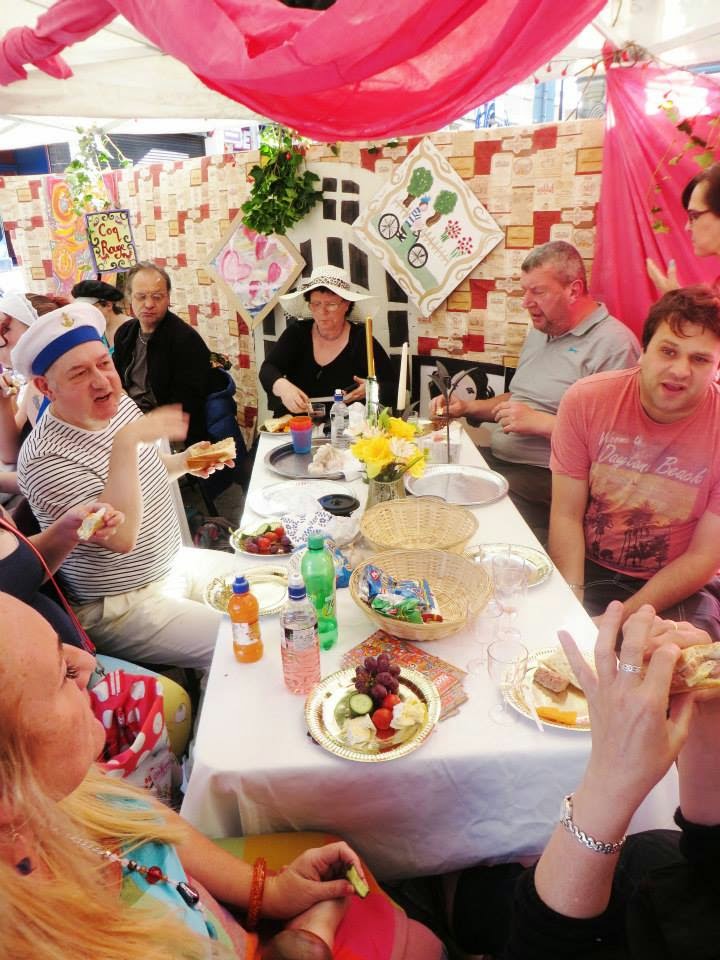 UPLIFTERS came together in the Town Centre and recreated Monmartre, the Parisian Artist Quarter! We basked in the sunshine, feasting on delicious bread and cheeses and sketching away to the sounds of the accordion. We were entertained by our stilt walking friends at Urban Angels and were even treated to an UPLIFT street sing-along to a few French numbers! 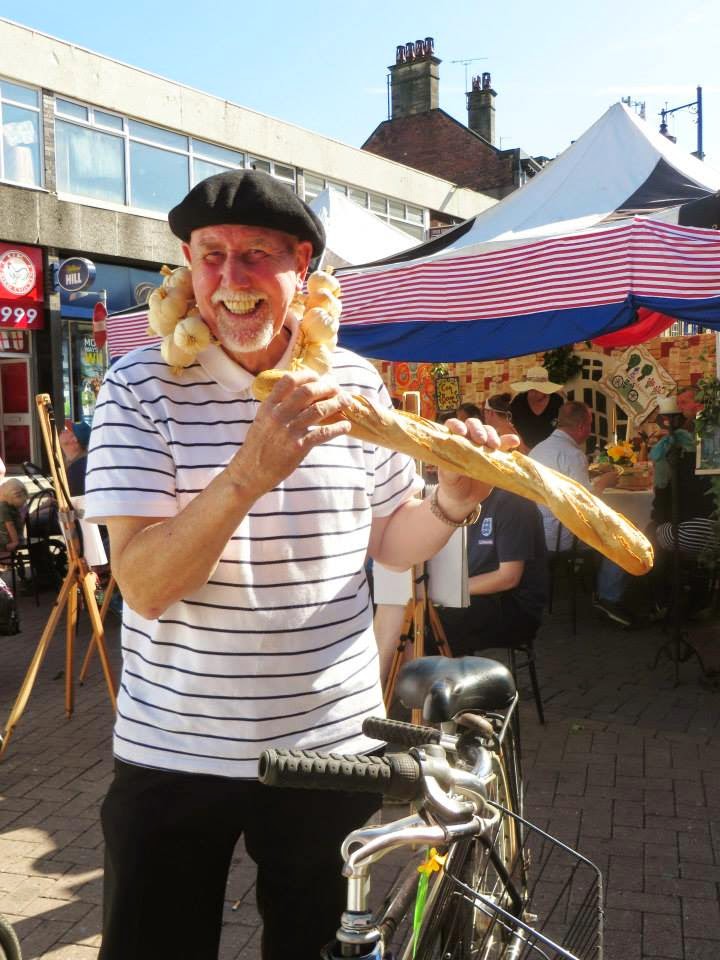 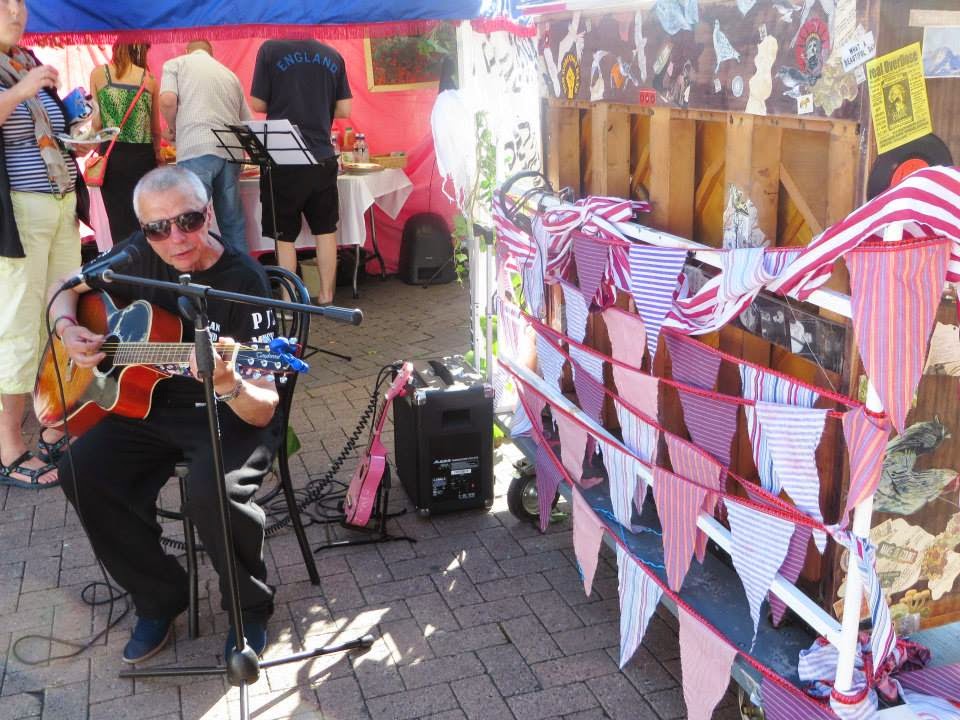 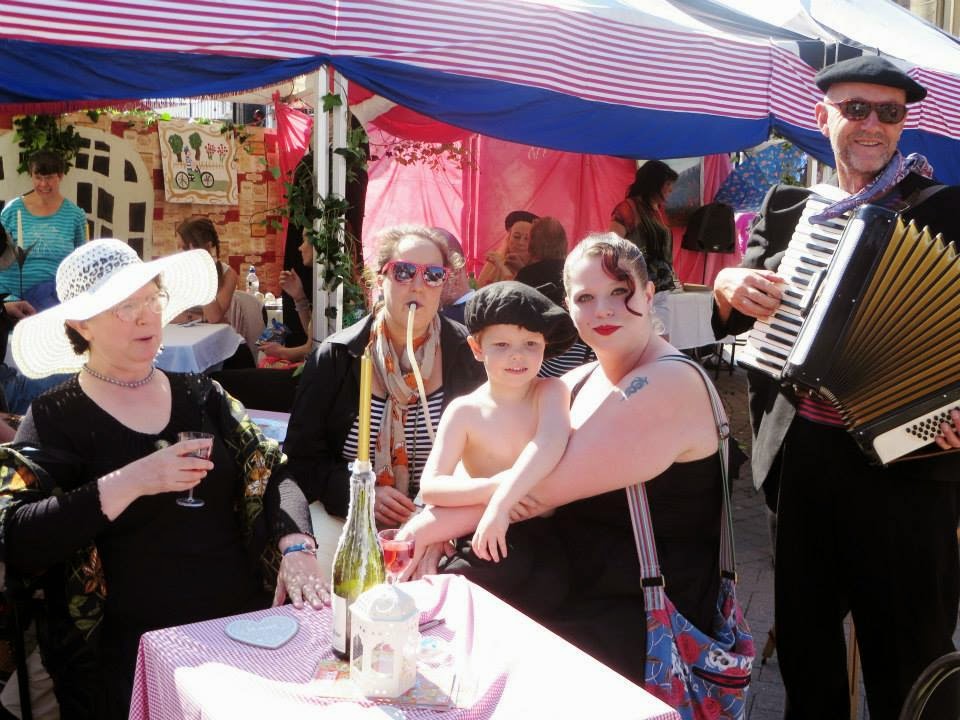 Posted by UPLIFT Barnsley at 08:53 No comments:

Creative Recovery’s efforts were recognised in Lord Mayor’s Parade as we picked up the prize for the “Most Outstanding Contribution!”

Three cheers for us and our fantastic following! 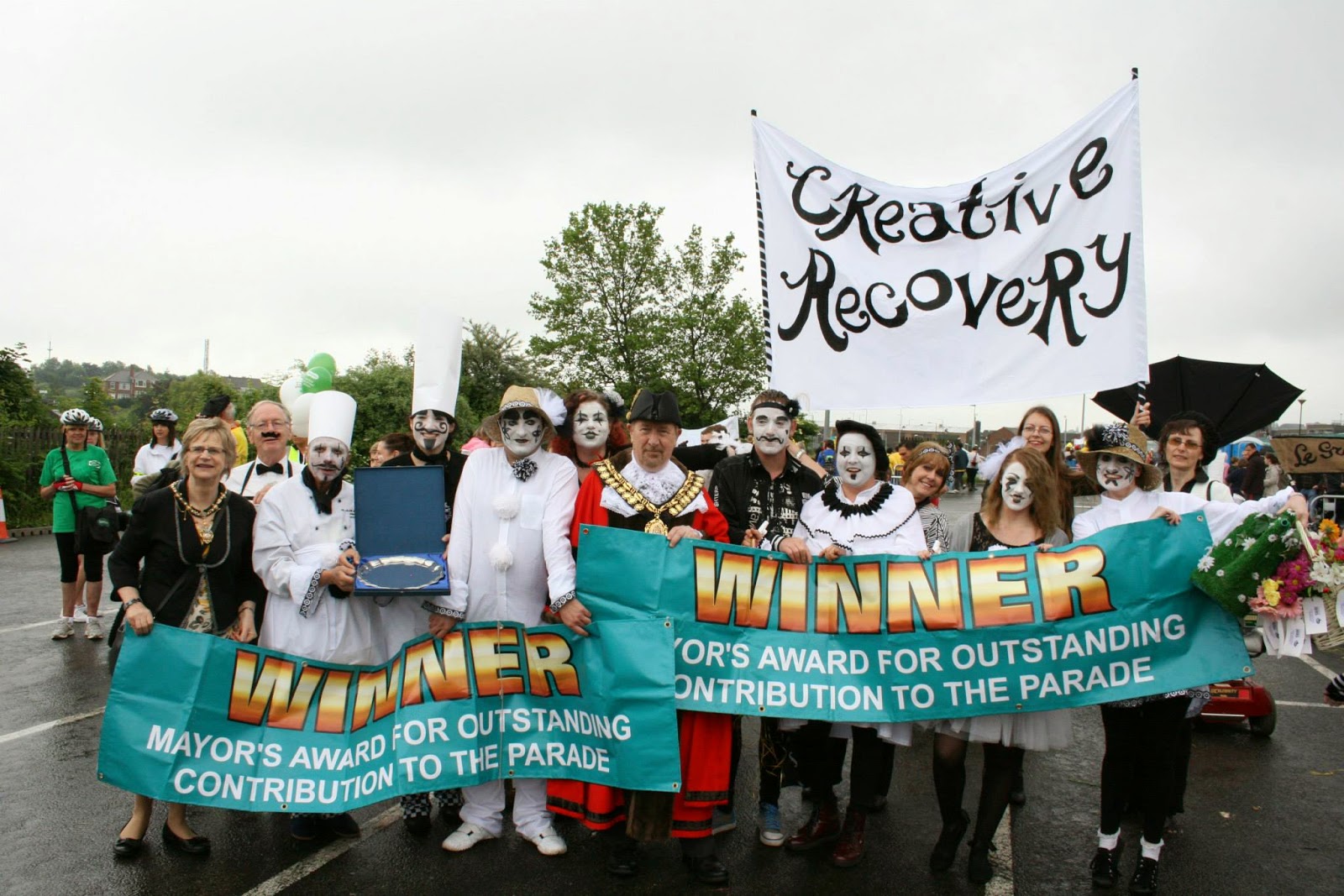 Pierrots, we salute you! 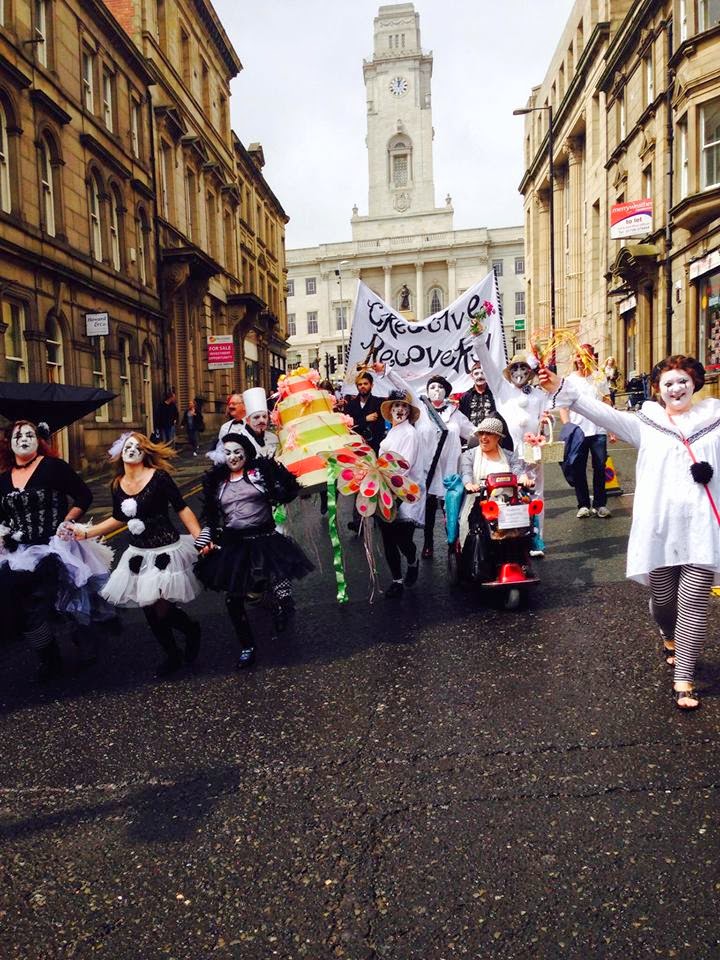 Posted by UPLIFT Barnsley at 06:23 No comments:

Creative Recovery Announced as one of the Mayor's Chosen Charities!

It's official – we can now reveal that we are one of the Mayor's Charities for the forthcoming year. What a great achievement! 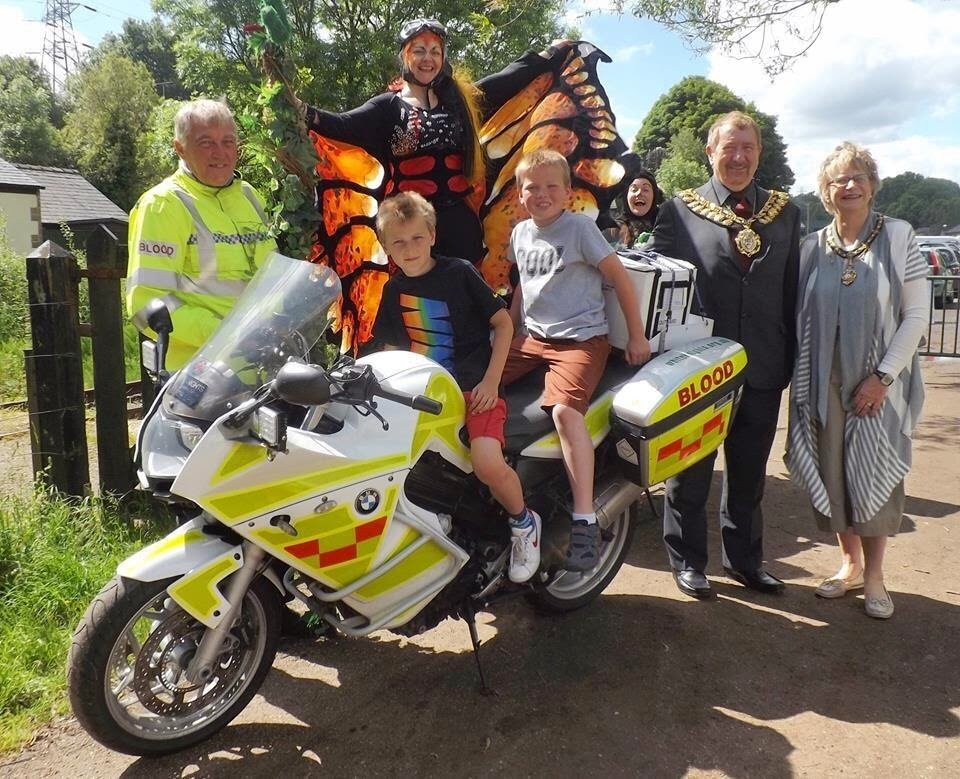 We’d like to take this opportunity to welcome the Mayor of Barnsley, Councillor Tim Sheppard into his new post and wish him all the best in his Mayoral duties. We’d also like to say a big thank you for choosing Creative Recovery as one of the official Mayor's charities -  it is a great honour. 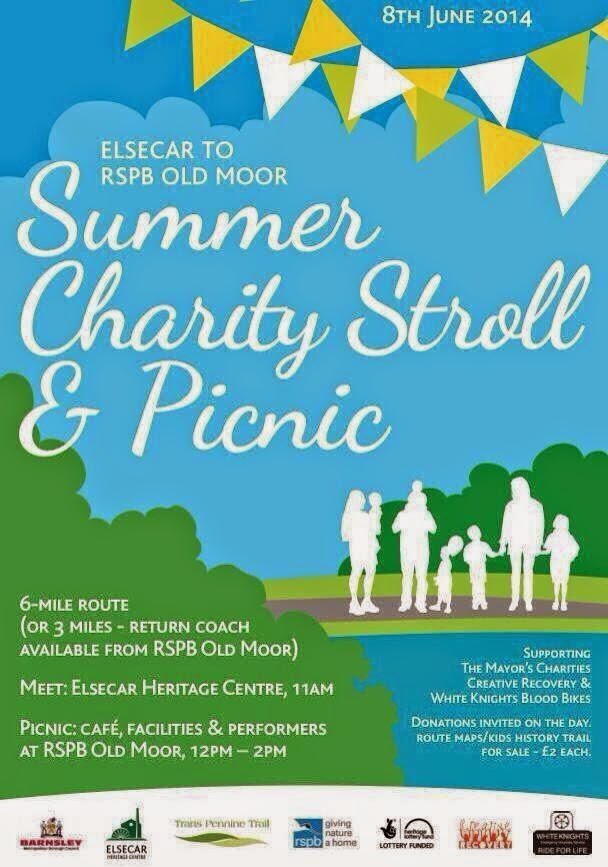 To mark the first of the Mayor’s events we joined the second of the Mayor’s local charities ‘The White Knight’s Blood Bikes’ for a summer charity stroll and Picnic. The weather was in our favour as families came together to walk from Elsecar Heritage Centre to RSPB Old Moor where they settled down to a picnic in the beautiful reserve.  In true UPLIFT style the bunting came out and the picnic area was decked with colourful prints and textiles all made in Creative Recovery projects.  Families relaxed to the chilled out sounds of Armando, Latin American Music that got the whole crowd playing along with a whole variety of weird and wonderful instruments and there was even a beautiful butterfly and greedy bear in the mix, interacting with children and trying to pinch the odd sandwich or two!
We had a brilliant day and are looking forward to many more accustomed events throughout the year! 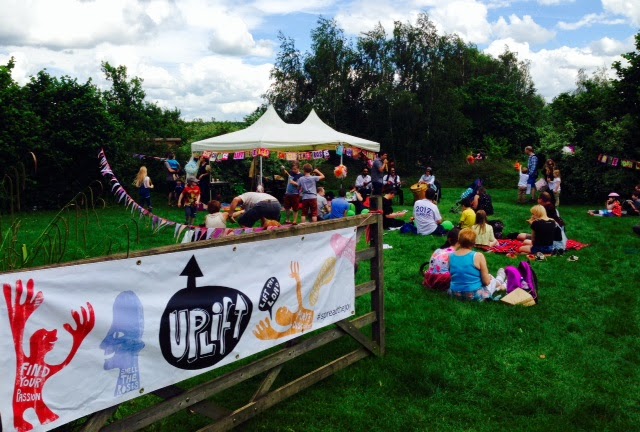 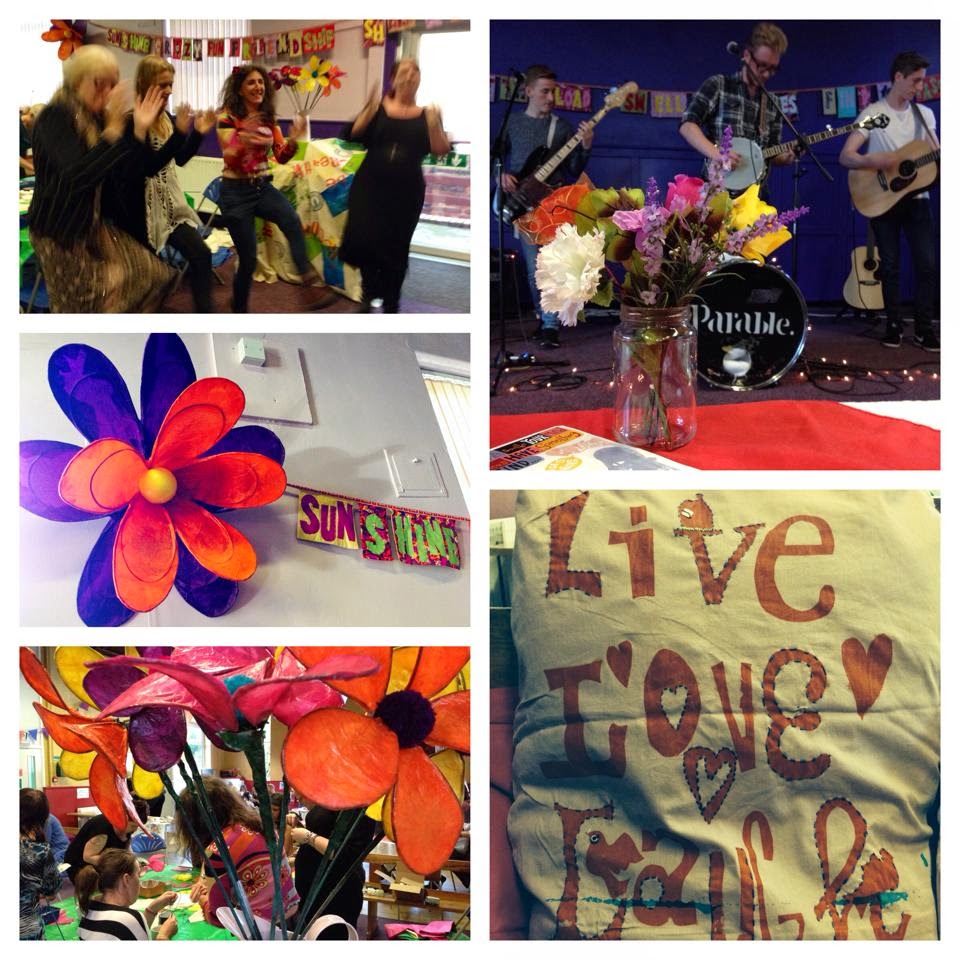 Saturday night saw UPLIFT back in Goldthorpe for a good ol’ Shindig!


With a little help from our friends Parable and UPLIFT artist Cecile there was dancing and stomping and wonderful crafting! It was great to see some friendly faces and meet some new folk too!
Posted by UPLIFT Barnsley at 04:47 No comments: